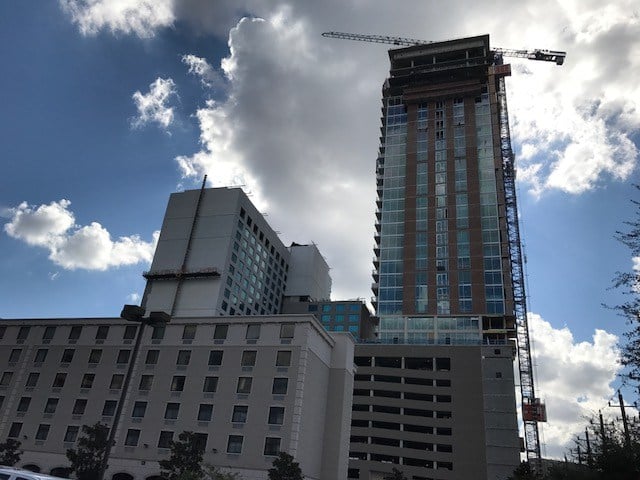 With a crane on top, the Greystar’s Latitude apartment tower is expected to open in 2018.
Photo credit: Ralph Bivins, Realty News Report.

HOUSTON – The micro apartment trend is coming to Houston in a big way.

With apartments as small as 339 SF, the Latitude Med Center residential tower will begin receiving its first tenants next spring, the developers say.

The 35-story high-rise building, located on Main Street between Rice University and Holcombe Boulevard, is being developed by a joint venture of the Greystar multifamily firm and Medistar, a Houston developer.

Units in the apartment tower, designed by the Preston Partnership, will average 445 SF.

The 375-unit multifamily project is located on the western edge of the 1,345-acre Texas Medical Center, the largest medical complex in the world with 21 hospitals, a number of medical schools and more than 100,000 employees.

The new residential high-rise taps into a growing trend for small living units in desirable urban locations with public transportation. Small dwellings also address the problem of affordability, which plagues Millennials who are burdened with student debt.

Micro units were the topic of a Urban Land Institute panel discussion I attended in October at the ULI Fall Meeting in Los Angeles. One of the panelists, Chris Frampton of East West Partners, suggested that rental housing may become more popular as a cure to the housing affordability crisis. The panel also took note of Detroit’s 28 Grand micro-apartment development, which offers some units less than 300 SF for $1,000 a month in rent.

In the Inner Loop of Houston, Surge Homes, a Canadian builder, is building some small condominiums at its new The Isabella at Midtown, 4001 Main Street. Condos there are priced as low $166,945 for units as small as 463 SF.

A growing number of small home developments have been discussed and proposed In Houston, which resonates with a social movement that advocates living simply and refraining from indulgence.

The Latitude residential tower will be an upscale place. Its adjacency to the new InterContinental Hotel – a four-star brand that has been missing from the Houston hospitality market for several years – places the Latitude apartments in an affluent genus.

Rental rates have not been firmly established at Greystar’s new Latitude Medical Center property, but some units will be available at less that $2,000 a month, says Greystar managing director Trent Conner.

A topping out ceremony was held recently at the Greystar construction site. General contractor Hoar Construction anticipates completing the building by the end of the summer of 2018.

The apartment tower will adjoin a new InterContinental-branded hotel, which is also under construction. The 22-story InterContinental, developed by a partnership of TRC Capital Partners and Medistar will open the 353-room hotel, 6750 Main St., in late 2018. Medistar also plans to tear down a hotel next door and build a 550,000-SF medical office building.

For now, Greystar’s micro-unit tower and the construction crane that’s perched on top of it, is one of the tallest new things on the Houston skyline. And the way the real estate market has been going lately, it may be the tallest new entry on Space City’s skyline for quite a while.